That’s why Samhain (aka HALLOWEEN, fam) was such a big deal for the Celts. It’s interesting – what I typically think of as “the middle holidays” in the Wheel of the Year, the ones that fall between the solstices and equinoxes, were actually the main quarter holidays for the Celts. Instead of focusing on the winter and summer solstices as the two poles of the year, they observed Samhain (which falls between the fall equinox and winter solstice) as the beginning of the dark half of the year, and Beltaine (aka May Day, right between the spring equinox and the summer solstice) as the gateway to the light half of the year. It’s an entirely valid perspective, of course, and even though I intend to stick with my beloved solstices, this outlook provides a really fun alternative.

And I mean, is it wrong? We are entering the dark part of the year, and from a practical perspective, marking it’s beginning right now captures all those dark, short, weak days leading up to the solstice as well as those that come afterwards. After all, the second half of November and all of December are just as dark as it is in January and early February. It’s like the Celts were onto something.

Most fun of all, they recognized the nights of this festival as I view those of Midsummer – the most magical nights of the year, the nights on which the borders between our world and the Other Worlds blur almost out of existence, the nights when we can encounter spirits and beings and creatures and wonder. Now, I’m not going to get into some fight with dead Celts about whether the nights of Midsummer are more magical than those of Samhain – what’s the sense? I’ll maintain my position while acknowledging unabashedly that despite my habitual distaste for the more trivial aspects of Halloween itself, this is a magical time. This is a gateway into the shadow months and a crossroads with the other planes of existence.

So let there be much magic! And merriment! And prayer and reflection!

These are things we can never do too often in the course of the year, you know. And I’ll take a night of magic any time I can get it. Call me a wizard, but I’m a sucker for that stuff.

Also, feel free to call me an idiot but I am only just now realizing that there’s Halloween (All Hallows’ Eve), All Hallows’ Day, and then All Souls’ Day. How’d I miss that all this time? I mean in my defense, much as I like to pretend sometimes, I wasn’t actually raised Catholic. But yeah, I mean this is pretty cool – a night of ghosts, followed by a day to recognize the saints, however we want to define them, and then another day just for all the other dead people. And while I love my saints, I have a major bias in this case towards the Souls over the Hallows. I mean come on, guys, we gotta throw the regular dead people a bone once in a while, right? 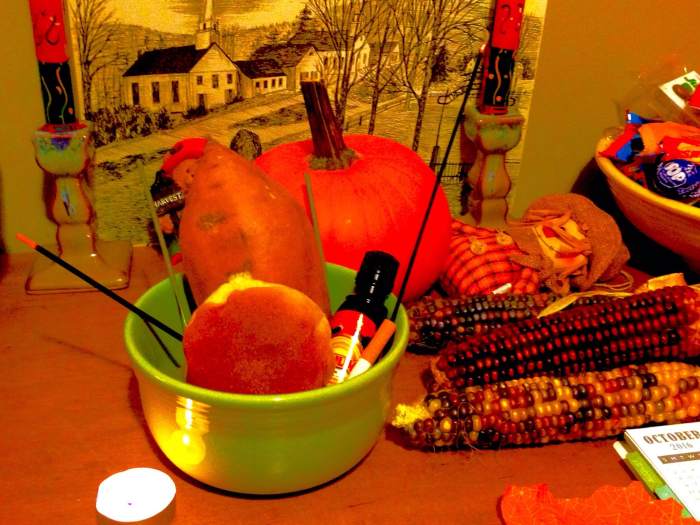 So I decided to at least attempt to do things right during this three-day festa this year. (Hell, I actually want to just point this out – I’m publishing this while it’s still All Souls’ Day, which means, for once, I’m not actually late for a seasonal recognition post! What’s happening to me??) But anyway, what’s pictured above there is my little Samhain-Magic-Fairies/Hallows-Saints-Prophets/Souls-Regular Dead People-Ancestors offering. Spirits and dead people like Kahlua and cigarettes, right? (If nothing else, Santa Muerte does, something that’s absolutely factored in here.) That’s a potato, a fancy roll, some green grapes, a fresh cigarette, a nip of Kahlua, all garnished with multiple types of incense, and two ritual consecrated New Hampshire Special sparklers.

I can talk loosely, maybe a little flippantly, about all this, but I mean it – I really did this seriously. An offering of my food, a place set out for the dead – exalted and proletarian – and the mid-level divine entities that own this season. I put this together on Samhain night, leaving the “place setting” out with humility and respect atop my altar all the rest of the night and throughout All Hallows’ Day. As the clock passed 12 and Hallows became Souls, I garnished the bowl, lit the incense, and went outside, walking toward the river in the backyard.

I lit the sparklers. 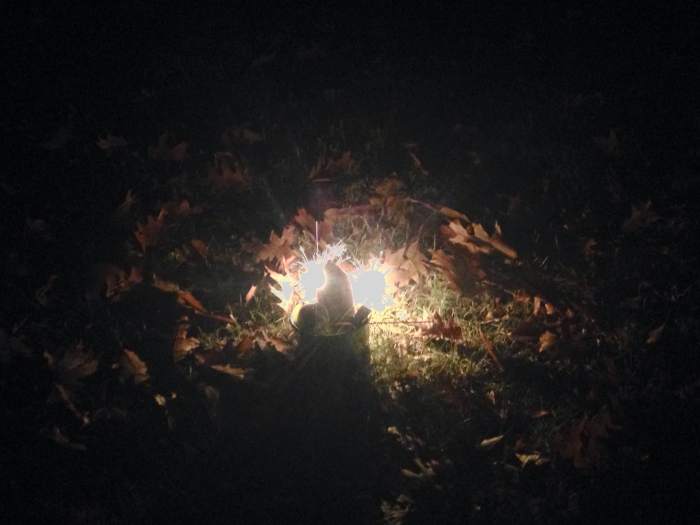 All year, I orient myself around the harvest cycle, planting in the spring and tending in the summer and harvesting – well, harvesting right now. But if we know the way to do it, there’s a mirror-image cycle we can also utilize to our advantage. That’s what this is all about, right here. I lit those torches in the darkness, placed that bowl of nourishment down so solemnly, out of a totally sincere and humble desire for a productive, pleasant Dark Season filled with joy and conquest. I really need that – perhaps more this year than usual. 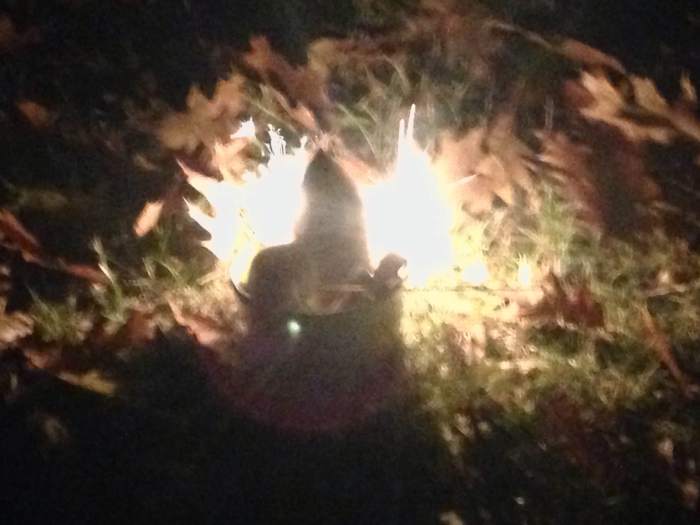 Stark violent blazing torches – alive for but a few moments and then gone, but while they yet live, I dedicate their life to all the friendly ghosts and sprites and tricksters and mini-gods out there. I like to think that if I show a little respect and they come close enough to get to know me, they’d wanna be my friend. For the saints, too, the sparklers do their dance, and I think they’d want to hang out and maybe do some projects together, too.

And let’s not forget the ancestors – let’s not ever forget the ancestors. Let’s remember their contributions (well, perhaps just the positive ones…perhaps not their sum total – all due respect intended) with gratitude and accept the responsibility inherent to the blessing of inheriting paths in the forest that they went ahead of us to blaze. Let’s remember all the ones we love that have checked out recently – last year, the year before, hell, five or ten years ago. Let’s say hi! Let’s let their faces fill our minds’ eyes, and may we look upon them with love – and may they return that love and do whatever is in the power of the deceased and disembodied and immaterial to give us a boost in the cold and dark months to come.

I am, quite openly, no fan of the cold and the dark. But I really want to see if I can have a good time this time around. Not just endure it, gritting my teeth and hanging on, but soaking it up and channeling the energy and riding its flow as much as I can, just like I do during the Light Half of the year.

I mean, we can’t just write off an entire half of the year, right? We only get so much time!

And so may the fruit and vegetation and baked grain of the earth be accepted as an offering standing for all that’s wholesome, may the fermented coffee liqueur with sweet hearty rum be a worthy offering of spiritual uplift and warmth of the heart, and may the tobacco bring gritty, defiant relief to all those beings I know are out there but just can’t see.

And may we be blessed, each and every one of us, as we walk onward, heads unbowed, into the darkness.