One Way of Going About It

In the Emmy Award-winning drama series Mad Men, creative genius ad man Don Draper employs a very simple solution whenever he gets stuck trying to come up with an idea. First, he begins drinking liquor – Scotch – to start off the morning. By lunch, he has a great buzz on; at lunch, the free-for-all begins. Time to get wasted and maybe engage in some wildly inappropriate philandering or other such wholesome behavior. After lunch, he returns to work just in time to take a nap on the awesome couch in his office – taking great care to ensure a glass at least half full of whiskey is ready on the table beside the couch.

Can we all improve our problem-solving skills by getting hammered in the morning and then taking a nap?

When he wakes up, BAM! There’s the idea.

Is it that simple? Can we all improve our problem-solving skills by getting hammered in the morning and then taking a nap?

Is it at least worth a try?

Well…actually, it might be worth a try, at least once or twice. Practically speaking, however, we probably can’t get away with this – and if you can, well…good for you!

With regard to matters of creativity and the spirit, there are many problems that can’t be solved by cerebral effort.

The notion of someone facing a creative obstruction that is only possible to dissolve by not thinking about it and doing something completely unrelated borders on cliché – which, while rendering the concept very unhip to explore, doesn’t mean it isn’t based in some grain of truth deep down. After all, creative problem solving, in art and everything else, relies heavily on the free-flowing influence of the subconscious, which by definition cannot be tapped directly and especially not by force. With regard to matters of creativity and the spirit, there are many problems that can’t be solved by cerebral effort.

No, when we encounter such frustrations and blockages, the answer almost always lies not in the mind, but in the gut.

Indeed, the wondrous Advent season is upon us once more!

Now, normally I say the same exact thing this time of year, every year:

As the year, already more or less over for all intents and purposes, draws to an official close, recognize the harvest you’ve reaped as the product of your actions and efforts over the course of the entire year.

Once you’re able to see it wholly for what it is, marvel at it, and give thanks for it.

Think about it some more. Lotta reflecty time is needed, especially now that we’re in the darkness all the time.

Now contemplate some more about next year and what should happen, and then make sure you pay all the right respects and celebrate in precisely the correct manner once the Christmas-Solstice holidays arrive.

Don’t get me wrong, it’s solid advice and generally sound thinking – I might miss an easy layup from time to time, but I don’t believe I go too far off the mark when it comes to understanding the significance of the calendar and its cyclical changes. I just don’t feel like talking about that this year. Sure, this is partly out of being sick of repeating myself, saying the same things annually just phrased a different way, but there’s more than that at work here. 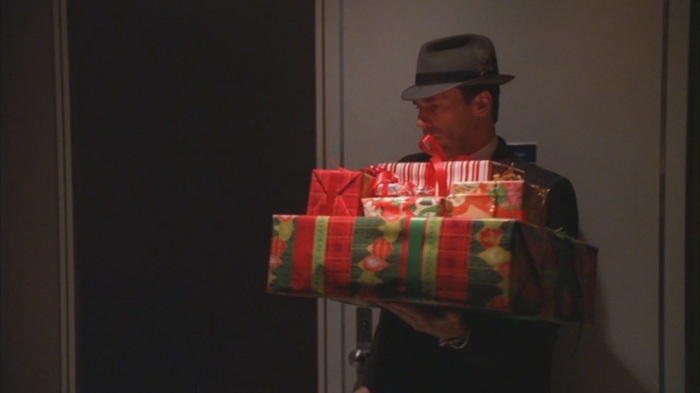 I’m writing something different this year because I don’t want to talk about thinking and the mind. This year, I’m unfocusing the lens and talking instead about how to live – and that instead requires using the gut.

I’m writing something different this year because I don’t want to talk about thinking and the mind. This year, I won’t be talking about specific things to do or particular lines of thought leading to modes of intellectual understanding that might (maybe) trickle over and become meaningful.

This year, I’m unfocusing the lens and talking instead about how to live – and that instead requires using the gut.

What Do You Think?

Where do you stand on this? Why does Don’s method work for him? Is it something that can work outside of an Emmy-Award winning fictional television program?

I’d love to hear your thoughts – you’ll hear the rest of mine in parts 2 and 3.