Yesterday, when we left off, our heroes (myself included) were scaling Monadnock’s final stretch, that place mostly above the artificial treeline where you think you’re there already but there’s at least a half hour to go and you’re very, very tired and kind of staggering along. That’s how the experience is for me, anyway.

The moon, technically still a waxing gibbous, had already begun to rise as the sun was well on its way to its setting. The hour was late, but the hour was beautiful, the hour was magical.

Interesting and perhaps even appropriate, isn’t it, that our attentions were so naturally drawn towards the moon, a living symbol in the sky and out in space for the realm and experience of the night? 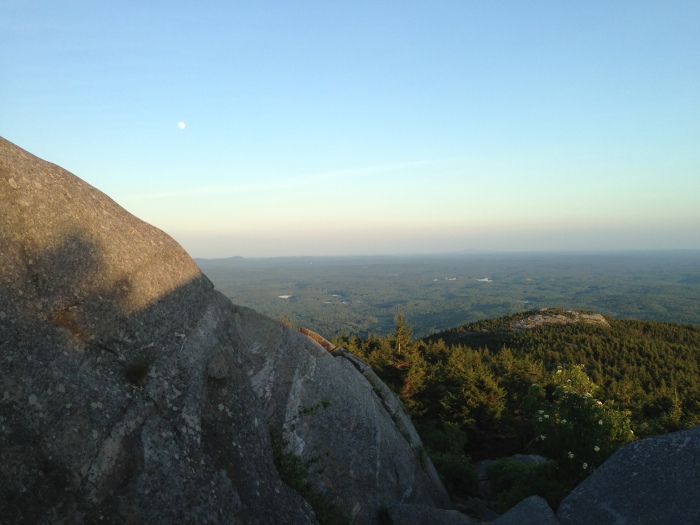 How impudent the moon, who refuses to wait, on Midsummer’s Day, for the sun to finish its grand cycle on its greatest day, before riding forth with authority and gall to claim the sky.

“You know I love you,” the moon says to the sun, “but your time was technically over several hours ago. You’ve had a good run, but you know you gotta let me take over.”

“Yes,” replies the sun with a knowing smile. 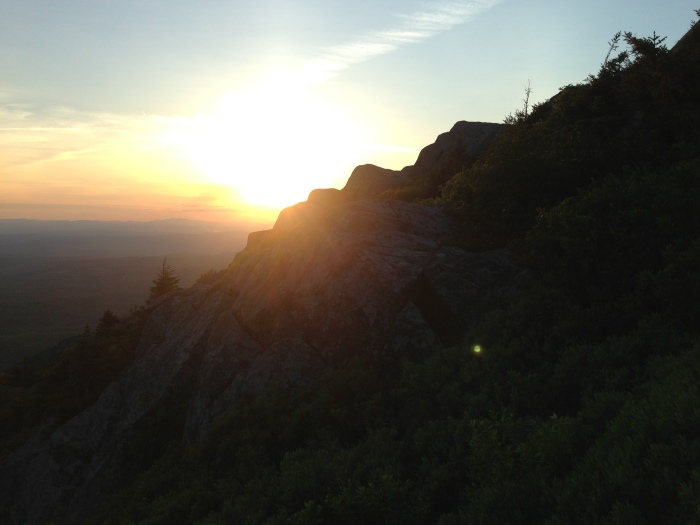 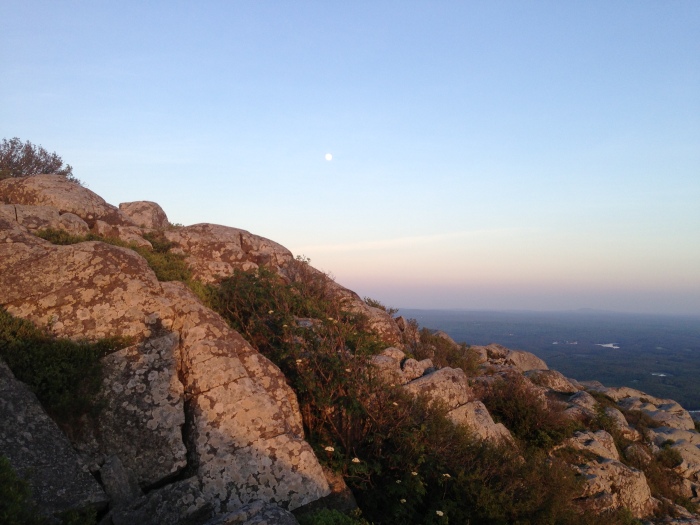 “You’re well within your rights and I respect your spirit,” the moon replied. “I can wait. I’ve got all the time in the world now. And I can’t even really do my thing until you’re around the corner – until we turn ourselves in space to orient away from you. By all means.”

And as this conversation gets played out, the same conversation that’s been had annually for a couple billion or so trips around the star, the arrow from those who blazed the trails before us, in concert with the soul of the mountain itself – my friend Monadnock – compels us forward yet a little further.

Yet a little bit higher to climb up. Just a little bit. But by this time, I’m starting to understand why we need a cycle and not a stasis – why the light must not only grow, but fade away again. The light is the light-giver, the light is the source of all energy in our little corner of the universe, and yet all work must give way to rest. All incessant climbing of mountains, all participation in the games and the structures of the world we must navigate below (a world that seems quite incomprehensible at this altitude), must cease and give way to recharging and repose. All hikes must give way to pizza and beer and music and, eventually, contented and well-deserved sleep.

And oh, what a wonderful light it is, here and now.

I don’t personally like to sleep, but how wonderful is it to dream, and then to awaken once more?

Rest now, in fact, just briefly, just for a moment, just to gather the walks to leg up that last little bit.

The hawks are with gladness,
When summer’s solstice comes;
Its light pours fiery fevered pulse into every and all,
And they say it kisses the earth with its final glimmer over the edge,
Kissing us goodbye as we turn away and towards the night,
Not just Big Brother Moon but all our old friends:
The stars.
Don’t be sad.
Summer’s just beginning, really  –
Though light now draws to advance’s end –
We’ll greet the champion Orion soon enough,
And the light the sky no longer harbors
Lives along instead within ourselves, within our cores.
And all the cores are one and the same.
We’re all in this together –
Rocks included.

But pause no more in bittersweet reverie:
The heavens are on schedule, but we are not,
We’ve many more miles to cover before pillows we shall meet.

Naught but the tiniest most insignificant little stretch remains between our bodied souls and the mystic omnipresent summit, and there is only exhilaration, only enthusiasm. Not an empty, overflowing sort, but the kind of spirit that comes of all ordeals, fasting, purification by fire or water – or in this case, just exertion.

Make no mistake, a climb is not just a climb. With currency of steps and breaths and calorie and muscle, we have purchased our ritual purification, a bizarro kind of holiday tradition we just lack collectively, without our own initiative as four seekers, four wanderers, four adventurers on Midsummer’s Day.

By making it this far, we’ve atoned for all of that. The divisions break down. 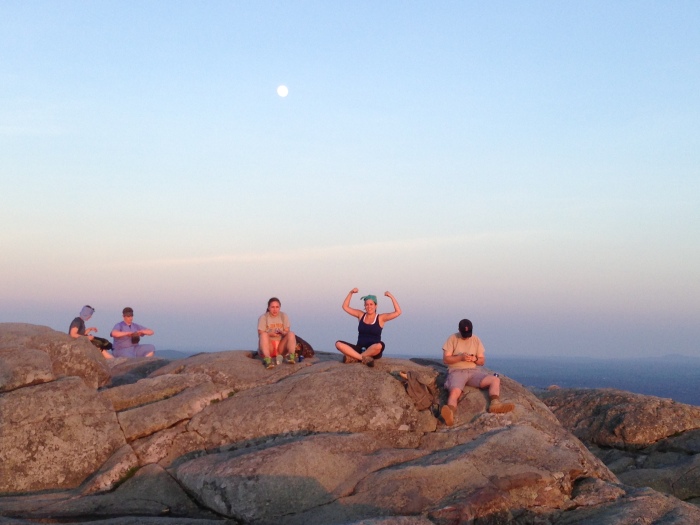 That joy erupts forth once more, not just in victory, and not merely this time through the symbolic communion of the forests or the rocks, but because the mountaintop is where you go to chill with the Divine. 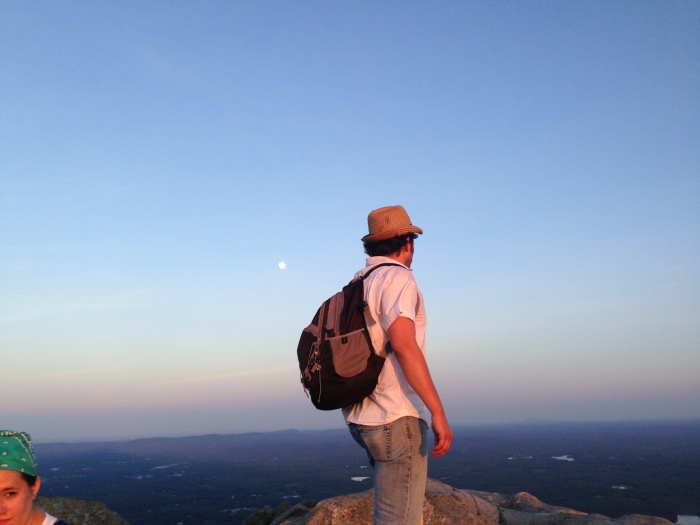 Mountains aren’t the only place to do this, of course – under the right conditions, it can be done anywhere.

But, hell, this is the best place around here to get close to heaven. 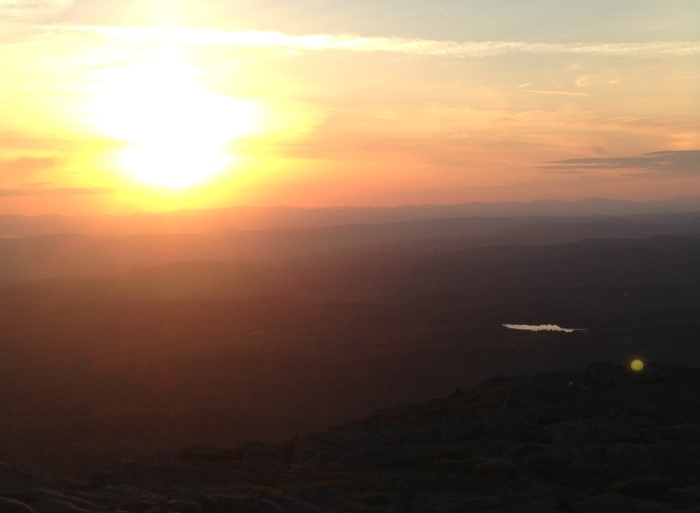 It’s always when close to it that I see so clearly that I’m never far away from it.

Even literally – this mountain looms ever over me whether I sleep or I work and I delight in it throughout each day – and I still don’t get it like I do right now.

There are troubles, and complications, and less than ideal things. But this, up here, is more like what the real reality is like. It’s quieter. It’s higher. Much clearer.

The miracle is Now: while the sun yet lives, while we yet live, we are at once connected and freed, we are the mountain – our bones and its stones part of the same grand mechanism. We stand proud not atop the mountain but as the mountain. Now.

We turn into the mountain imps we really are, distant cousins of the legendary pine monkeys. 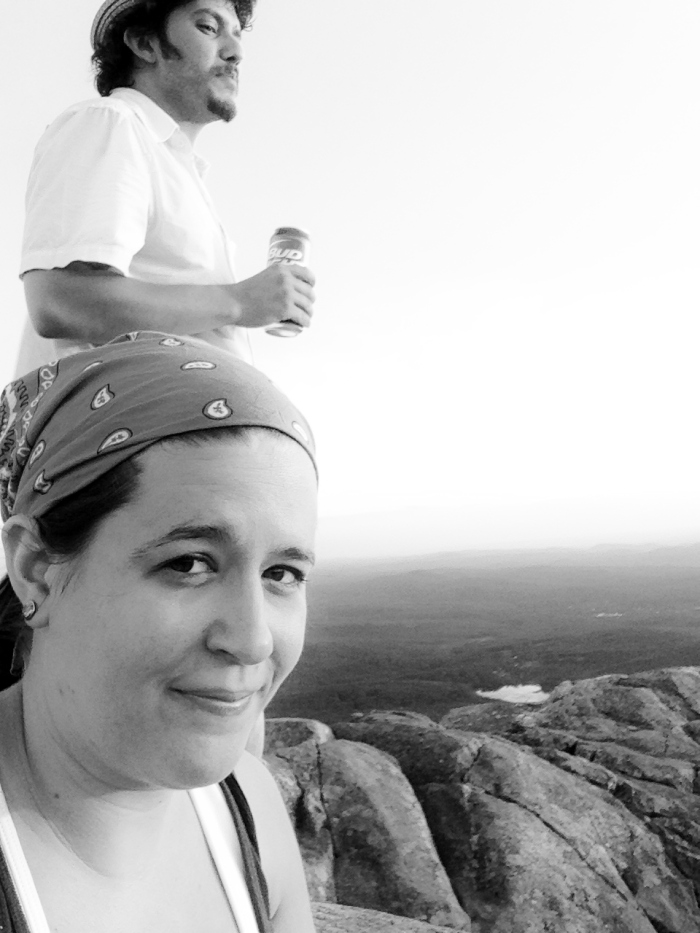 We relish this life and this day and this love and this holiday.

We think about it.

We think about it some more. 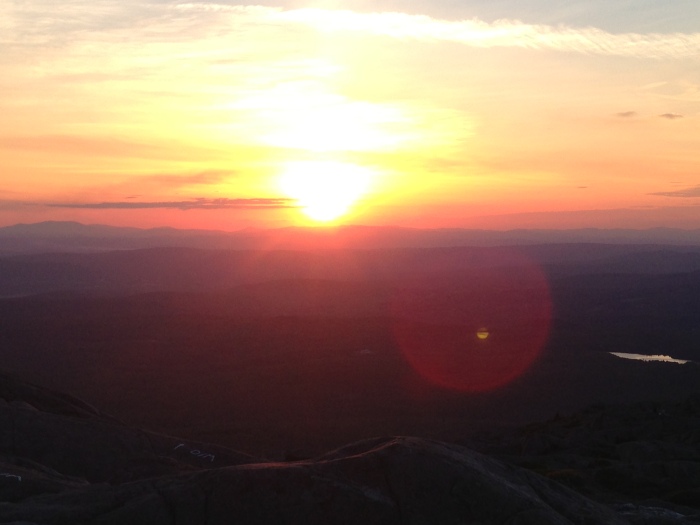 Just look at it. The paint on the rocks doesn’t say “OM” – but it should. 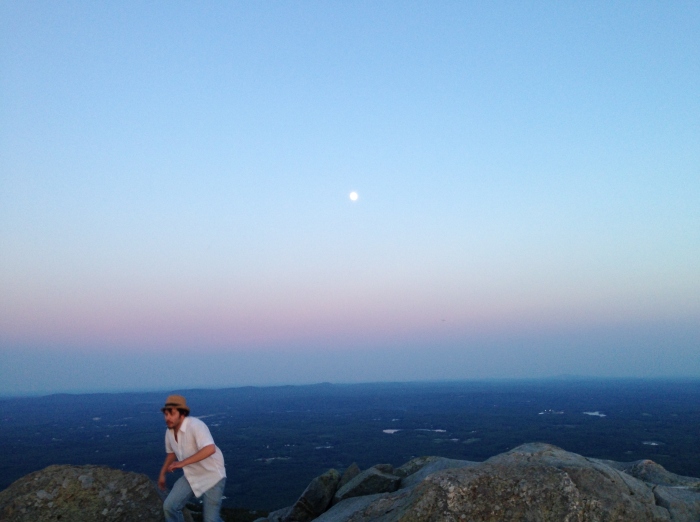 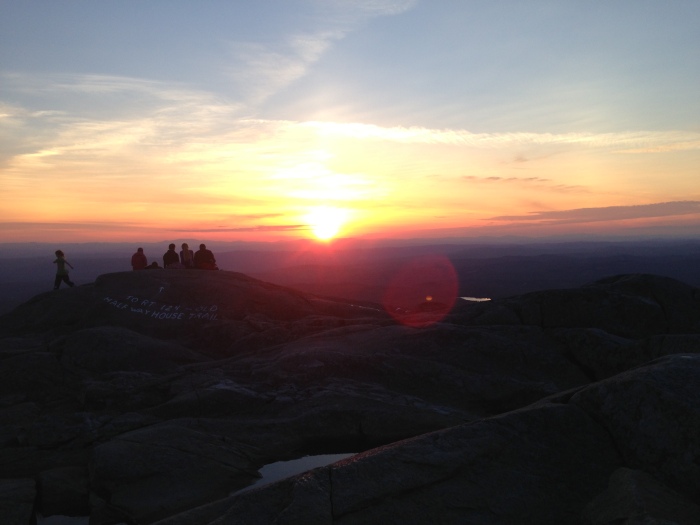 We go off and look and wonder, gazing across all the land below.

This is the center,
Not “this” but “we”.
We are not from her,
She does not belong to us.
But not only do we belong to her,
YEA, WE ARE NEW ENGLAND!
We sit upon her crown,
We marvel at her blessed rolling hills,
This earth around us from whence we came
And to where we go,
And beneath which the sun goes now. 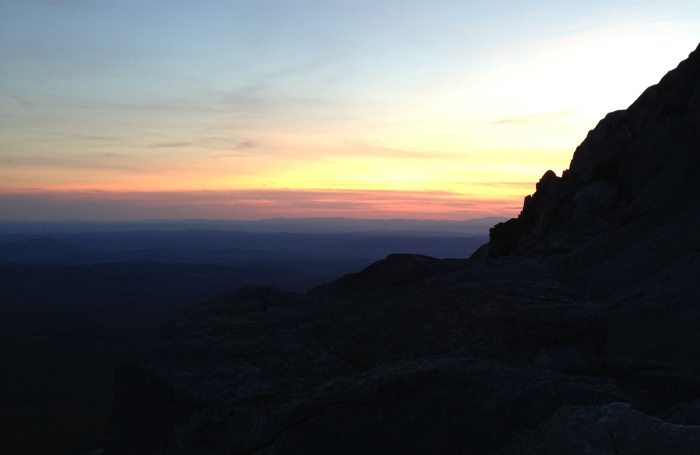 Midsummer is no more. In its wake is left only a powerful canvas of color.

And now, coming into its own over the towns as they glimmer on with their artificial firefly lights, is our patient friend the moon. The moon, indeed is our friend, for without that light we will surely be lost as the darkness comes on. The sun will live on in its reflection, will guide us down to our cars and our home paths.

Transformation of the world all over again. Rebirth of a different kind.

Here our blessings – the markings of our forebears in monumental manifestation, and the only light available in this sea of deepening vivid gray.

But then I decide incorrectly that we’re going the wrong way, and we leave the trail just as darkness races across the sky like steroided horses in Kentucky in May.

It’s pretty, but where are we going, and will we get there? 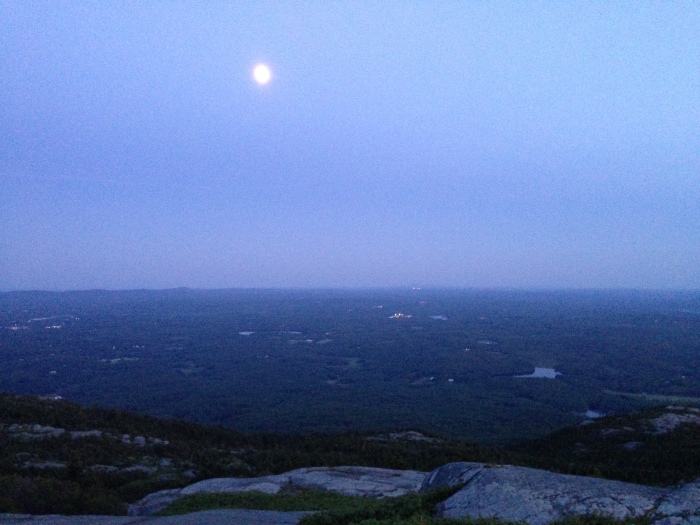 We have a long way to go – a long way to go in the dark. It’s true enough as a metaphor, but I’m not sure I wish to speak in terms of higher meaning at this point. The mood is getting a little skittish. 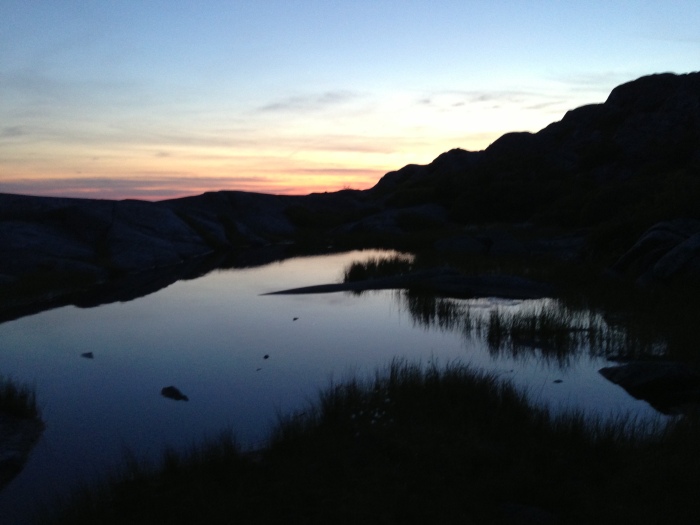 This bog, as we called it, is where angels come to hang out when nobody is around. This is pretty much all the time, because it’s not on the path and so smart people don’t go here. Since we were here, the angels left, and only a mighty bullfrog remained to play reluctant host to intruder adventurers wandering dangerously off the path at night.

Wrong way, we must yet adventure on. ‘Tis the way of things. 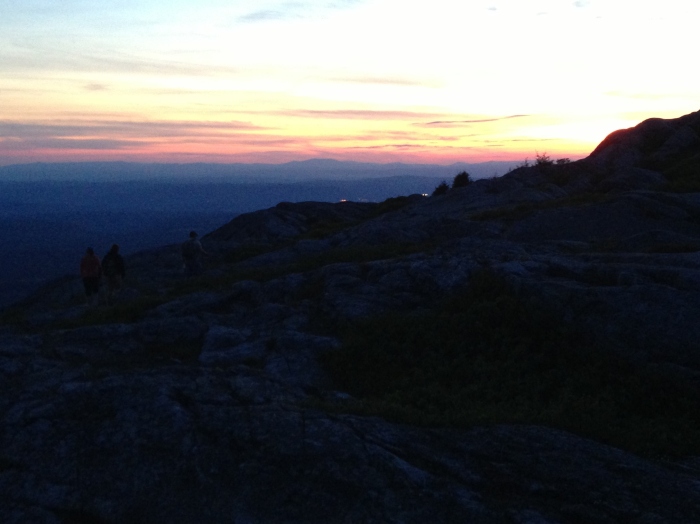 Still not going the right way. Getting darker. 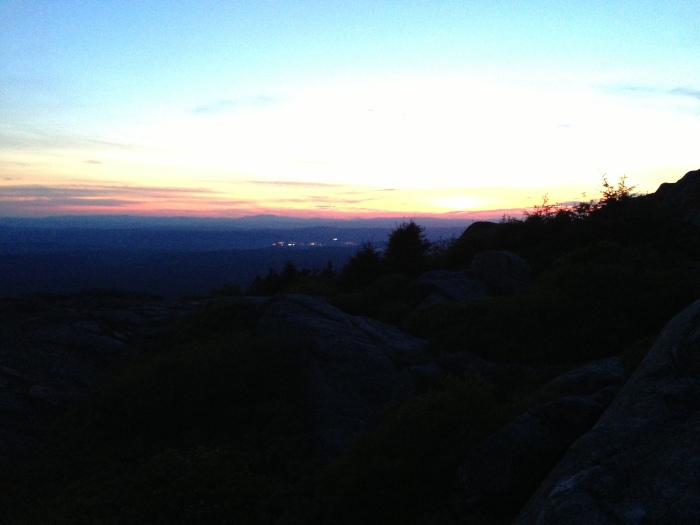 But since we’re here, interesting factoid – that’s Keene nestled snugly in its evil little black hole of a valley down there!

But now we’re really in for it. This is a dead end. We’ll scale over the corner in this picture, climb down and down…nothing but 100-foot drops to one side, precariously small two-food ledges our only saving grace, and it’s a dead end. Just like life. But, also like life, since we lowered ourselves so many times, we now have to climb back up – with those same drops looming.

The obstacles were thick and everyone was getting scared. At heart, I understood that the problem was not physical or safety-related but existential: faith told me the machinations of the universe didn’t include an end to our collective (or individual) stories on this magical night, but reality, or my deterministic side, told me that this was it – it was all Now. Do Now or Do Never, so you must Do.

So we did. With praises to the divine for grace and mercy, my sister found a cairn. We were back on the White Dot Trail, where we should never have left in the first place. It was my fault…but who can apologize for adventure. 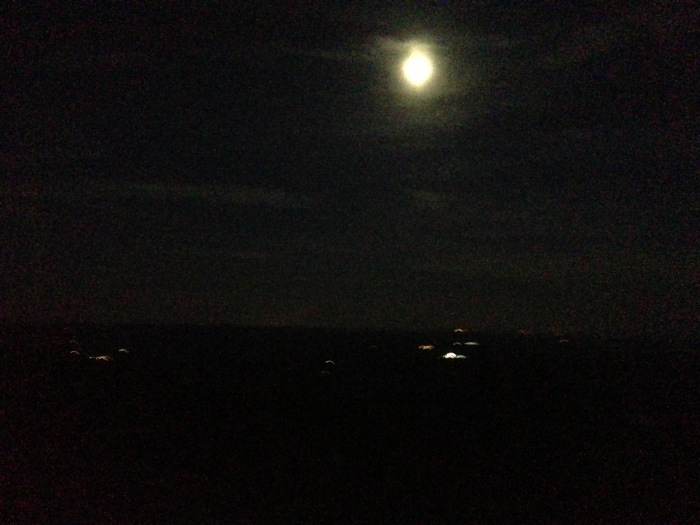 Light, o light of the world – be with us as we descend into the darkness, into the humble forest below.

Mighty Monadnock, now behind us, remaining steadfast upon the throne, bid us farewell and the best of wishes.

I didn’t take pictures of anything else, because there was little more than darkness. Just like what lies ahead of us. Darkness and weariness – but, spoiler alert, we made it out safely (at 11 o’clock) – and mirth and pizza and bed also lie ahead. That’s the second half of the year for you. We were blasted with light on that mountain, but everyone was blasted with light on June 21 because you can never escape the sun.

Bank it. Unlike money, you really can take it with you.

Quick trip to the bike path under the sky. #nofilter #kidonbike #bikepath #peterboroughnh #april7
The latest track suit. I promised @kellieseestheworld this was the last one but only time will tell whether or not I was lying. #blackandgold #peterboroughnh #coviduniform #sevendaysseventracksuits #7days7tracksuits #tracksuit #adidas #threetogo
I have decided, after careful deliberation, that Adidas track jackets are officially my COVID uniform so I have procured a second one. Before this thing is over I will have one for every day of the week. #7days7tracksuits #adidas #coviduniform #tracksuitnation #trackjacket #pandemicfashion
Me and Manny took a couple walks today #spring #covidwalking #distrusteveryone #fatherandson
Earthscene #water #plants #gray #sounds
Black jaguar prints