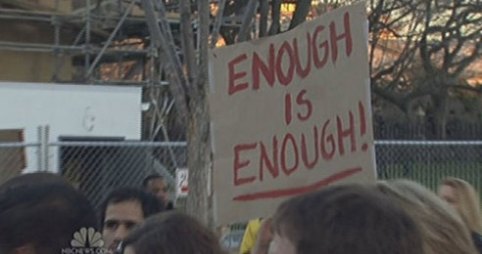 The public discourse that we’ve seen since Friday’s massacre in Newtown, CT has been truly disturbing on so many levels. This will likely get lost in the static of the wall-to-wall, 24-hour coverage on cable news and online. Oh well. I think it’s long overdue.

First let’s get one thing straight: as far as I’m concerned, anyone who says that “now is not the time” or “we must not politicize this” also must admit that they do not favor democracy. In a democracy collective society discusses and debates policy regardless of the circumstances. If you are not capable of that, I’m sorry, please carry on and leave the heavy lifting to the adults in the room.

To be clear, having a policy debate is not in any way, shape or form disrespectful to the families of the victims. To refuse to want to find any and every way imaginable to reduce the likelihood of this being repeated is not merely disrespectful it’s flat out dangerous. If you want an example of inappropriate politicization you need to look no further than Sen. John McCain’s recent (and successful) war against Susan Rice, the United Nations Ambassador who was hung out to dry for a terrorist attack in Libya that she had absolutely nothing to do with. But I digress….

The thing is, aside from the one issue of gun violence, whenever there is a tragedy in this country, we react by demanding new and improved public policy (for better or for worse). Just imagine what Fox News and the Bush Administration would have done if democrats suggested that we “not politicize” the deaths of 3,000+ Americans on September 11th because it would be “disrespectful” to the victims. (Of course, wiretapping Americans, attacking and occupying the wrong country, declaring that capturing/killing the mastermind behind the attacks is a low priority and pouring cement over the bodies of the first responders was exactly the wrong way to engage in a public policy debate; but, again, I digress…)

Moving along to the topic at hand…

What happened in Newtown is without a doubt especially tragic. The horrific mental images of that day will surely haunt us for decades to come. But we need to establish something here. Stop for just a moment and imagine 229 classrooms filled with 25 students each. Now imagine every single student in all 229 classes being shot and killed. It’s literally too much to even fathom, isn’t it? Well, that’s how many kids and teens died of gunshot wounds in 2008 and 2009 (the most recent accessible data available). The pain felt by those mothers and fathers does not at all differ from the pain felt by the families in Newtown, does it? And before you say it, let me cut you off: gang violence is not the underlying cause to these stats. Urban and rural children have the same statistical chance of dying from a gunshot.

The statistics are staggering and I could go on and on (read this and this if you want a bit more perspective on child shooting victims). I’m not a criminologist nor am I a constitutional scholar. However, you do not need to be either to realize that thousands upon thousands being killed with guns in one year (especially when no other first world, high-earning nation on earth has a similar issue) is a crisis that dramatically eclipses the writings of the Second Amendment and screams for common sense regulation. This is quite similar to our (considerably more) precious Freedom Of Speech. Oliver Wendell Holmes was not at all ambiguous when he limited free speech by declaring that free speech does not allow for you to shout “fire” in a crowded theater as your right to free speech does not eclipse my right to not get trampled in a stampede of fearful theater goers. Do you disagree? So please, enlighten me: why is that we can regulate our freedom of speech but not the ownership of deadly firearms? Where is the logic?

I am truly awestruck and just unsure how (or more important why) anyone would advocate for anything less than the most intense gun control legislation possible. Some make the laughable argument that gun control won’t stop a madman like those in Aurora and Newtown to which I say, no shit, sherlock. Does that mean we should just throw our hands in the air and give up? Does that mean we shouldn’t collectively work together to reduce the chances of not only mass killings but the thousands of other needless deaths caused by guns each year? With that logic, perhaps we should just eliminate speed limits too. After all, many people are guilty of chronic speeding despite clearly marked speed limits and highways dotted with ticket-happy state troopers. Safe travels!

Some also have the gall to say we should give out more guns because “maybe if the Newtown principal was armed, Newtown could have been prevented.” To which I ask (to quote Barney Frank), on what planet do you spend most of your time? Perhaps you were referring to gun owners protecting themselves from evil-doers like Treyvon Martin? Statistics on this one are beyond clear: you are 17 times more likely to shoot yourself in a suicide attempt if you own a gun and you are three times more likely to commit a homicide if you own a gun. It is fact, owning a gun makes you less safe.

By the way, if you’re a “law-abiding gun owner” then you should know that none of this applies to you. Your right to own a gun hasn’t changed and won’t change provided you continue to remain in the category of “law-abiding gun owner.” I am, again, at a loss for words when someone in said category objects to regulations that only make it more difficult for children and those who are not law-abiding to get their hands on something that can cause carnage like we saw in Newtown.

It’s too bad the Newtown tragedy is what seems to have actually prompted this discussion (key word: seems). This isn’t political. This isn’t a matter of right versus left. Those who insist upon framing the argument that way have blood on their hands. It’s that simple.

The words of Winston Churchill never seem more true than they do today:

“Americans will always do the right thing… after they have exhausted all the alternatives.”

One thought on ““Americans will always do the right thing… after they have exhausted all the alternatives.””

Yeah
Thanks @flightcoffeeco for keepin it real and keepin me jazzed all throughout the PANDEMIC. Peterborough peeps, you should know that they deliver (and that there’s no coffee within 50 miles of here that’s remotely close to this level) #coffee #ethiopiancoffee #flightcoffee #drinkingcoffee #havingsomecoffee #coffeeshipment
Just a hint of pink #peterboroughnh #nofilter
Suppah #suppah
I love the way the last light of the setting sun glints off the top of “the seat of the realm” #peterboroughnh #nofilter #sunset #realm #government
Yeah happy Friday!! #friday #covidcigars #whitepines